It’s the stench of a variable annuity.

If you just threw up a little bit in your mouth, I don’t blame you.

If you didn’t, you probably don’t know enough about variable annuities. 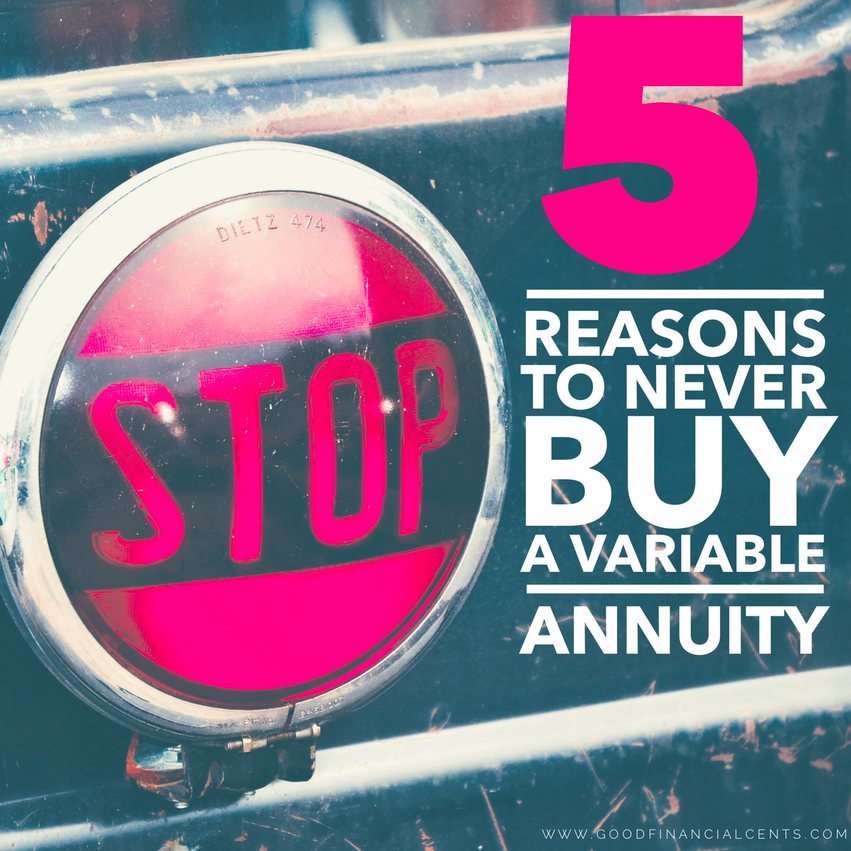 It’s a contract between an owner and an issuer whereby the owner agrees to give the issuer principal, and in return, the issuer guarantees the owner variable payments over time.

Sounds innocent enough, but are they?

Variable annuities are one of those products of which I can pretty much make a blanket statement and say they’re horrible.

“Why are they horrible, Jeff?”

I thought you’d never ask. Let me count the ways!

Variable annuities have extremely high fees. Picture a Tasmanian devil gobbling up your money. Picture throwing cash into a bonfire. Picture . . . well, you get the idea.

The national average for variable annuity fees is 3.61%. Ouch! Remember, that’s just the average. Fees can go above 5% and you may not even realize it when it happens to you.

And by the way, I’m not the only one speaking out against these outrageous fees.

Variable annuities are one of the most oversold products in the financial services industry. Especially for people that are in the Accumulating Wealth Phase of their life, these investment vehicles tend to slow down the process of actually accumulating wealth due to the high fees that are associated with these products. Most investors would be better off owning lower cost options in ETFs and/or appropriate mutual funds.

Thank you Michael. I agree.

High fees can make a huge dent in your potential earnings. Even if you are expecting to make a 7% return with an annuity, those fees will make that number look much less attractive.

Curious on what types of fees you can expect to pay?  Here’s a breakdown on what could potentially be eating away at your returns (quotes via the SEC):

Even the SEC warns against the high fees that variable annuities have: What makes variable annuities so sneaky is the fees are hidden.  Literally.

You’ll hardly ever see the fees on your statement.  If you really want to find out how much you’re paying you’ll have to read the prospectus.  You know that 47 page booklet that looks like something only a 3rd year law student would be interested in reading?

I often joke with my clients suggesting they put an annuity prospectus on their nightstand if they are suffering from insomnia.  Reading the prospectus will cure anyone’s insomnia in minutes!  🙂

Variable annuities have something called sub-accounts, which are basically clones of various mutual funds.

Now, when you sit down with an insurance salesperson – and even some investment advisors – and they tell you that you can choose from a variety of investment options within your variable annuity, they’re telling the truth. But what they aren’t telling you is that you can’t choose from any mutual fund – you must choose from their predetermined list of sub-accounts.

I don’t know about you, but I love to have choices. Choices are a good thing, especially when it comes to investing.

What’s even more frustrating is trying to do research on the sub-accounts within variable annuities.  While there are some that are modeled directly after open ended mutual funds, there are 1,000’s that are extremely difficult to find any data on whatsoever.

I’ver personally spent hours trying to do research on several variable annuity sub-accounts using both Morningstar and Thomson Reuters research tools only to find myself beating my head against my desk after hitting dead end after dead end.  If it’s difficult for me to do research on sub-accounts, think how difficult it must be for the investor who isn’t privy to all the paid research tools that I and other advisors have.

So while companies that sell variable annuities may boast about how many options you have inside of a variable annuity (say, around 80 to 300 mutual funds), you have many more options if you just open a TD Ameritrade account,  and it will be MUCH less of a headache trying to do research on them.

You read that right.

Companies do not have to be in financial trouble to take away the death benefit or income riders for new policies, and sometimes they try to change existing policies when possible. One company offered a lump sum to tempt people to get rid of guarantees.

Another required certain changes to be made or the riders would be eliminated.  Here’s a sample of what that company was requiring their shareholders to do: That’s why it’s important to understand that changes in a company’s policy may affect your ability or willingness to maintain those benefits.

In summary, guaranteed death benefits and income accounts may have a lot of fine print you should understand before you sign on the dotted line.

Oh well, you just lost your money. And guess what? You really didn’t have a choice anyway.

This can happen to you. As Mike Lester at Fortune.com explains how, and I’ll break it down for you here.

What are those restrictions? Well, we already covered how death benefit and income accounts aren’t really guaranteed. But sometimes there are more restrictions.

This particular “time bomb” restriction has to do with income or death benefit riders that are restricting the investment options to portfolios that are requiring a minimum percentage of bonds held at all times in the account.

Why is this a problem? Well, many times these insurance companies who offer variable annuities don’t offer a fixed interest option or money market option in the account. This creates a situation where your money must be 100% invested in the market all the time.

Now, the idea of using equities and bonds to create a balanced portfolio isn’t new, and it’s certainly not bad practice. But if you’re forced to stay in the market because of the restrictions of your variable annuity, you may be also forced to watch your account lose money while interest rates are going up and quit markets are correcting.

Because the funds invested in a variable annuity are in the market, you can potentially lose your money. Oh, and just because you read the word, “guaranteed,” that doesn’t mean you’ll necessarily get a guaranteed return. Read the prospectus!

If you’re wanting a way to save your money and make a little interest, try a high-yield savings account.

Yes, I know I’m repeating myself. But I’m doing so for a very good reason.

Listen, the last thing you want to do is pay outrageous fees. Too many variable annuity policies have these unreasonable fees, and they will eat away at your money.

Here’s what Todd Tressider at FinancialMentor.com says about variable annuities:

. . . consumer advocates argue some variable annuity fees are so steep it can take more than a decade to outperform more straightforward investments, the benefits are misrepresented, and the restrictive features and penalties aren’t adequately understood.

Now, you might be asking, “Okay Jeff, so how do I invest without paying those high fees?”

One great option is investing in the stock market with AssetLock™. AssetLock™ is proprietary software that is only available through a select group of advisors. The software is designed to monitor your stock market accounts every single day.

I am an AssetLock™ approved advisor. I’d be happy to show you how AssetLock™ works and explain why it’s a great alternative to variable annuities. Take me up on this offer!

The bottom line is that variable annuities stink. I mean, really.

First, you have the outrageous fees. Then, these variable annuity companies are going to limit your investment options. You also can’t be too sure that these companies are going to want to keep your death benefit and income account benefits around. And scariest of all, you could lose all your money because you’re investing in the stock market without some kind of monitoring like AssetLock™ provides.

And remember, the benefits can be really confusing. Here’s what Alan Moore, CERTIFIED FINANCIAL PLANNER™ at Serenity Financial Consulting says about benefits:

Variable annuities are incredibly complex, and are difficult for most financial advisors to understand, so I don’t expect the vast majority of consumers to really understand how they work.

He also went on to say:

There are plenty of advisors that don’t earn commissions, so consumers should be sure their advisor is working in their best interest.

I agree. Learn how the fees and commissions work, and hopefully you’ll understand why it’s important to say no to variable annuities!

How One Woman Paid Over $3,500 in Variable Annuity Fees and Didn't ...
GF¢ 049: From Broke at 37 to Self-Made Millionaire
Advertiser Disclosure
(How We Make Money)
GoodFinancialCents.com has an advertising relationship with the companies included on this page. All of our content is based on objective analysis, and the opinions are our own. For more information, please check out our full disclaimer and complete list of partners.