72 is a very good number

Ask any financial advisor about 72t and I’ll bet you’ll see them cringe.

It’s not a popular planning method, mostly because it comes with lengthy restrictions that, if violated, can lead to severe penalties.

Some of you may have no clue what 72(t) is.  If you are not planning on retiring early (before the age of 60), then skip this post and come back another day.  🙂

If you are in the financial position to retire early and have a bulk of your assets in retirement accounts, then 72(t) may be of help to you. Let’s take a look at the 72(t) early distribution rules.

Most often when you take money from your retirement account before you turn 59 ½, you are assessed a 10% penalty on the top of ordinary income tax. One exception (others include: first-time home purchase, college tuition payments, disability) to that is a 72(t) distribution that is a “substantially equal periodic payments”.

Read more on How to Withdraw From Your IRA Penalty Free

The IRS calculates your “substantially equal periodic payments” by using one of the three methods that the IRS has determined and then take your payment on a set schedule for a specific time period.

It is required that you take those payments for either 5 years or when you turn 59 1/2, whichever comes later.

For example, if you start taking your payments at the age of 52, then you must do so for 8 years. Someone who starts at 57, must do so till the age of 62.

In the 10 years I’ve been a financial planner, I’ve only executed 72(t) a handful of times.   The concern is having to lock in your withdrawal rate for a minimum of 5 years is longer than most advisors are comfortable with- myself included.

Recently, I had a potential new client that was getting an early buyout from his job and was considering using 72(t) for a portion of his IRA.  Here’s are some of the details (name and some of the data have been changed for privacy concerns).

The 72(t) plan must not be modified until 5 years have passed from the date of the first distribution for those who will reach 59.5 before the 5 year period is completed. However, it is not clear whether Paul plans to take the 72t distributions from the employer plan or from a rollover IRA.

If the 72(t) plan is needed, the best approach is to do a direct rollover from the plan to a rollover IRA, determine what IRA balance is needed to generate 24k per year using the amortization plan, and then transfer that amount to a second IRA and start the plan.

The original rollover IRA can be used for emergency needs to prevent the 72t plan from being broken if he needs more money. Employer plans do not provide 72(t) support and may not offer flexible distributions. They also will not allow funds to be rolled back in the event too much is taken out due to an administrative error.

Note: that if Paul separated from service from the employer sponsoring the qualified plan in the year he would reach 55 or later, distributions taken directly from the plan are not subject to penalty, and a 72t plan could be avoided.

But for that to be practical the plan must allow flexible distributions until the 5 year period ends. If the plan required a lump sum distribution, even though the penalty would not apply, a distribution of 120,000 in a single year would inflate his marginal tax rate and that might well cost more than the 10% penalty.

If a lump sum is required, then a direct rollover to an IRA should be done before starting a 72(t) plan.

Before you lock in those payments, there are some alternatives that you may want to explore:

Just because you can, doesn’t mean you should. Definitely look to see if there are other things you can (should) do first.

Here are a few examples.

If you leave your job January 1st of the year you turn 55 (50 for certain government agencies), you are allowed to pull out lump sum distributions out of your company retirement plan penalty free.


Notice I said retirement plan and not IRA.  Once you roll over into an IRA, you lose out on that opportunity.

Consider leaving a portion of money in the retirement plan as a precautionary.  Or you can just take a lump sum distribution out of the plan and pay the tax and park it in a high-interest savings account for emergency purposes.  Do remember that you will pay ordinary income tax on that distribution.

Don’t Forget About After Tax Contributions

Even a bigger secret than 72(t) is NUA.  What is Noo-uhh you ask? Well, it is the acronym for Net Unrealized Appreciation.  Get it yet?  Didn’t think so.  NUA pertains to employer stock that you have in your retirement plan that may have an extremely low cost basis.

You may be one of the lucky ones that started working for the company prior to them going public and you’ve seen your company stock double and split more times that you can count.

If you utilize the NUA on your stock you will just be penalized on the basis, not the total value of the stock.

The remaining gain ($80,000) would be taxed as a long term capital gain when you decided to liquidate it, not ordinary income.  That could be the difference between 15% and 35% in taxes, depending on your tax bracket.

Warning! Once you roll over your employer stock into the IRA, you forfeit your NUA.

These are just a few of the alternatives that one can explore before committing to the 72(t) distribution rule.

The verdict is still out whether the client and I are going to do 72(t).   Since he has a good amount in his 401k and his wife has a nominal 401k, as well (not mentioned above); I suggested using that money first.


Since he’s retiring early, he can avoid the 10% early withdrawal penalty so as long as the money is distributed from his 401k.  Once you do a 401k rollover to an IRA, you lose that option.

Out of curiosity, I went to Bankrate.com and used their 72t calculator to see how much we could get with his retirement account.  Below are some of those results. Here’s a sample amount that one could withdraw from your IRA using 72(t). Note the interest rate of 2.48%. That amount was already entered in on Bankrate’s calculator.

You have the ability to choose your own interest rate but be careful. You want to choose a rate that is normal and sustainable based on current market and economic conditions. 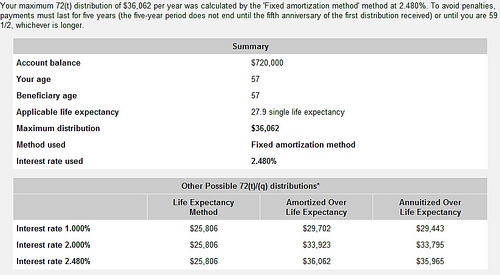 Have you retired early?  Would you be comfortable executing 72(t) distributions for 5 years?

What Happens to Your 401k When you Die?

Can You Have Multiple IRA (Traditional or Roth) Accounts?

Should You Rollover Your Pension Into an IRA?